Multicultural Mauritius: the calendar of public holidays in 2018

"One people, one nation, all Mauritians". This is the motto of Multicultural Mauritius. One of the greatest treasures of this country is unquestionably its ethnic mix which gives it a unique cultural identity.

In this Multicultural Mauritius, since all cultures and religions live together, the government adapts the calendar each year in order to share equitably the 15 holidays. Here are the 2018 holidays dates and significations to keep in your agenda:

The 2nd of January

The 31rst of January: Thaipoosam Cavadee

The 1st of February: Abolition of Slavery

The 13th of February: Maha Shivaratree

The 12th of March: Independence Day and Republic

The 18th of March: Ougadi

The 1st of May: Labor Day

The 15th of August: Assomption

The 14th of September: Ganesh Chaturthi

The 2nd of November: Indertured

The 7th of November: Diwali

The 25th of December: Christmas

Illustration of Multicultural Mauritius with this film about the Spring Festival parade for the Chinese New Year. 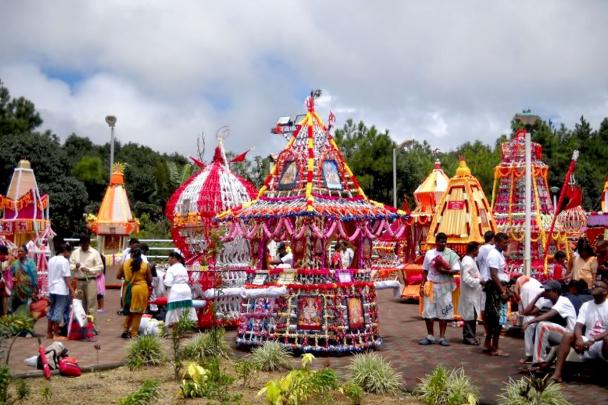 This Hindu religious festival is celebrated every year around February, during the moonless night of the "Phalunga" month of the Hindu lunar calendar. Devotees fast for several days and then walk to the sacred lake of Grand Bassin, located in the southwest of Mauritius. So for 4 days, the roads are filled with hundreds of thousands of devotees dressed in white, who carry on their shoulders a kawal or kawar, which is an arch built of bamboo and wood, decorated with beautiful flowers, colorful bells and images of Shiva. Once there, they pray to Shiva, offer fruits, flowers and milk, and pour water on Shiva Lingam (sacred stone). Then, the believers bring back sacred water, which they will use during their prayers for the Great Night of Shiva, in a temple not far from their house.